Recently I had the privilege to sit down with one of our XPACE Summer Residents to ask a few questions about his practice and the work he is doing here at XPACE.  Lee Aaron Wiesblatt, a recent graduate of OCADU’s Printmaking program describes himself as a 27 year old emerging artist.  Previously at OCADU he studied Drawing and Painting, Sculpture and Installation as well as Criticism and Curatorial Practise before ending up in Print.  His multi-disciplinary background  influences his artistic practice, and from the sounds of it, will definitely be evident in the work he creates at XPACE.

JESSICA CAPPUCCITTI: When did you become interested in printmaking?

LEE AARON WIESBLATT: I’ve been into printmaking for quite some time. In high school I was experimenting on my own with stencilling and spray paint, and eventually the cheap Speedball home screen printing kits.  I had a couple of friends who were already in their upper years at OCAD and getting to watch them print encouraged me to start dabbling.  Even when I was taking more sort of cerebral academic courses I would always have some studio stuff on the side, so there was a sustained engagement with print all the way through; eventually I realised that’s what I needed to do.  It was the last major I declared but it had been in my heart and in my course load all along.

JC: What type of printmaking are you most interested in?

LAW:  What I’m most interested in is photographic, mechanical reproduction, offset lithography, the four-colour process – I’m kind of a fetishist of that aesthetic – but my personal approach to print is almost always informed by experimentation, and trying to figure out what is appropriate to the statement that’s being made.  So in general I’m kind of a big medium specificity guy and I try not to shoe horn any pre-existing idea into an existing aesthetic

JC: Tell me about the work you are doing here at XPACE for your residency.

LAW: What I think I am going to be doing is an interactive installation in XPACE, which will be sort of about mapping and reconfiguring a subjective space.  I don’t know how much more I can tell you…  For this project I’m kind of going back to the drawing board and learning a bunch of skills that I’ve never built before including working with new media technology, specifically Arduino builds and programming.  This is all going to be pretty new to me but there should be a print component as well as a more traditional three dimensional installational component.

JC: How does being here in XPACE affect the way you work and provide inspiration?

LAW:  Well you’ve noticed that I have made myself at home.  I think there are some photographs of the workspace that I’ve brought to XPACE on the website. (see the home page and this blog post!)
I’m really into compartmentalization, so having a space that’s specifically for working really helps to feel like I have something to do, a place to go mentally.  I’m just finding it an enormous asset and there’s all kinds of tools, apparatuses and technology that’s just around, and digging through it has been a big inspiration as well.  And of course Amber and Cameron and Alicia have been an enormous help in helping me clarify my idea and help crystallise it and I think that it’s an enormous pleasure and an enormous honour to have been brought in.

LAW:  Well I think that I kind of think collaboratively before I’ve even opened my mouth, because I tend to attempt to view things through different angles… sort of analyse and break down connotations… think about how different people would come to the work, all toward the end of having a really succinct personal view point, regardless of whether it is immediately recognisable or anything that translates.  But I am very open to collaboration and I think that thought is formed like a language and language is communal in nature.

JC: Where do you see your practice going from here?

LAW:  That’s a good question and I really don’t have an answer at the ready.  I think I might take some time to just be a dude.  I’m currently working on a script for a short film that a friend of mine and I are going to be developing.  So that’s always been an interest of mine as well, and I feel like this is the opportune time to try wearing as many hats as possible, and distribute myself creatively to figure out what comes next.  If there is a theme in my work, it’s reinvention.

JC: How do you see this residency influencing or affecting your future work? 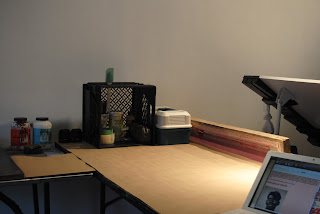 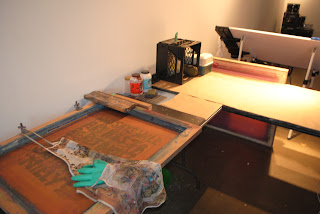 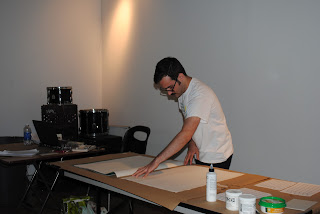 LAW:  The work that I’m doing right now is taking me to places I haven’t been before, and depending upon whether I have any measure of success with the really novel elements I’m bringing, that might be something that I explore for a while.  The idea of interactive work is deeply appealing to me.  I imagine that I’ll be doing that a lot more in the future, and without this residency I doubt that I would have leapt into this kind of project so quickly after school.