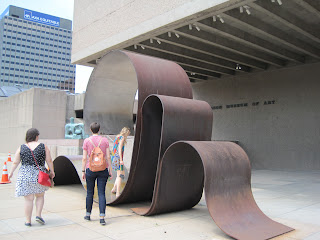 Upon their return from Syracuse, I sat down to chat and catch up with our SPARK Residents, Adrienne Crossman and Ursula Handleigh.  Both artists discussed the important influence of their surroundings on the artwork they created and the unique shared experience in Syracuse.  They also gave me a sneak peak into the work they created for the exhibition, Neither Here Nor There opening at XPACE on Friday September 14, 2012.

Neither Here Nor There will be up until October 6th, 2012

Jessica Cappuccitti:  What was your favourite part of the SPARK Residency?
Adrienne Crossman:  I think what I liked about it was that I was in a different place.  When you are having trouble finding inspiration, it’s kind of helpful to be in a new environment.  Syracuse was completely different from Toronto in so many aspects.  Being in Syracuse was isolating in a way because I didn’t know anybody and there’s not much to do but it gave me all of this time to just constantly think about, and do my work, which I have never had before. So I would probably say that was the best part. 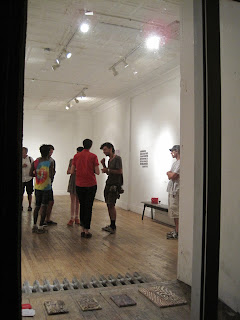 JC:  What was your favourite part of the city itself?
AC:  The city is small and kind of abandoned and there’s not a lot going on there, but the nights when something is going on, everybody that’s interested in it, is there.  SPARK is beside this hardcore music venue called Badlands which was having a concert / travelling film festival that was screening films the same night we had our show.  We had our opening and then they had that event, so everyone that was at either event was kind of comingling.  It seemed like it was the only thing of that kind going on in the city that night.  That was what was cool about Syracuse.
JC:  What was your favourite thing to do or see?
AC:  Dinosaur Bar-B-Que – I went 3 times… (laughter) 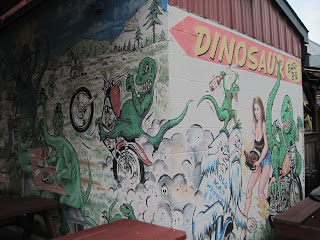 (See “XPACE visits Syracuse !” blog post from Tuesday July 3, 2012 for pics of Dinosaur Bar-B-Que and more…)
JC: (jokingly) What was your favourite thing to eat there?
AC:  It would have to be, pulled pork and brisket with a side of mashed potatoes and gravy, and a side of macaroni and cheese… with a Syracuse beer.
JC:  That’s incredible!
AC:  It was incredible – it’s worth the 6 hour drive!
JC:  How did your surroundings affect your work?
AC:  The work that both Ursula and I did took a lot from our surroundings.  Because the architecture, the layout and the feel of the city were so different from Toronto… but also, different from any city I have ever been in.  In one block, out of 5 buildings, 3 will be abandoned and boarded up.  You can walk for 20 minutes and not see anybody.  So there’s something about that feeling… We’re in this kind of desolate, abandoned city.  Also, we were housed in the attic of this 200 year old historic mansion that had been restored – so we were staying in this really, really expensive house but our neighbourhood was kind of run-down, so it was the clash or the mix of really nice stuff versus this run-down environment.
There’s wood everywhere, all of the windows are boarded up and I would just see wood grain everywhere.  The floors and doors of this house we were staying in had fake hand-painted wood grain on it, so it was like, people had been hired to hand-paint this unique wood grain all over the floors and all over the doors to make everything look more expensive.  So a lot of my work came from making faux wood grains and taking a picture of that wood grain and replicating it in different ways, because I think it’s really weird to hire somebody to paint fake wood on wood to make it look like wood.  So there was this whole contrast between rich and poor, fake and real.  So in terms of my surroundings, I made work in Syracuse that I never would have made outside of that environment.
JC:  How did you like working in SPARK Contemporary’s space?
AC:  At the beginning we both spent a lot of time in the house.  I ended up doing some printmaking – some lino cuts – so I would just carve them at the house.  We would work during the day at SPARK and sometimes I would stay up late working in my sketchbook or working on stuff in the house.  Everyone told us that you don’t really want to be out at night, so if you’re working in the studio during the day and you want to take some stuff home then it’s better to not be walking or biking after it’s dark.  We didn’t run into trouble though.  As we got closer to the show and I had a lot more stuff to do that was messy, I would work a lot in the studio.  It was great because it was a really open space and there were 2 big open spaces so there was a lot of room to work.
JC:  How did you like working with the people at SPARK?
AC:  They were really helpful because they picked us up from the bus station and Casey, one of the girls that runs SPARK, brought us to the grocery store, and after that we were given a lot of freedom.  They gave us the key and the space was ours for 3 weeks, to do whatever we wanted with.  It was good because we had to be very independent and come up with creative solutions.  It was very undirected.
JC:  Tell me more about the work you created – the final product.
AC:  I bought 5 large pieces of thin cardboard and made wood grain on them.  Ursula told me about this wood graining tool – you take a flat surface and you put wet paint on it then you run this tool through it and it makes wood grain.  I did a brown one, so it really looks like wood and I did a red, yellow, and blue one.  So I did panels of that, and then I did 4 lino cuts with different representations of different kinds of wood grain.  I also found pieces of a broken down desk that was made of that fake wood, cardboard stuff that desks are made of, so it looks like wood but it’s not wood, and I wood grained those so they look like wood but they look fake and real at the same time.  And then I hung everything on the wall and made a video piece that I was projecting in the other room. 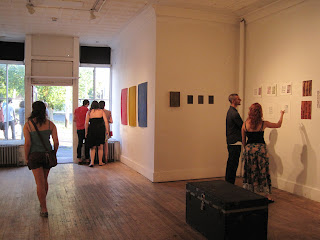 JC:  What was the video piece?

AC:  I took footage of different kinds of wood grain all around the city and the spaces I was in.  And then I edited it together.  The video I made is a rough sketch for what I am going to be showing at XPACE in September, because I didn’t have enough time to complete the piece.
JC:  Which leads into what I wanted to ask you next –you seem to have done a lot in a short period of time
how were you able to complete so much work in such little time?
AC:  In terms of the prints, I made all of those prints 2 or 3 days before the show.  3 weeks is not a lot to make a body of work; to come up with the idea, make work, have a show.  So, I think in terms of the prints and the wood graining stuff, all of that as is will be up here, but in terms of my video – video work because it’s time based just takes more time.  I took a lot of footage there, but  there’s a lot more tweaking I have to do before it will be totally done.
JC:  Did you and Ursula inspire each other?
AC:  Yea we did actually.  The house we stayed in interested us both a lot.  We had a lot of similar ideas in terms of how our surroundings were inspiring us.  She was really good to bounce ideas off of and vice versa.
JC:  How will this residency affect your future work?
AC:  I think it will be good in the sense that, it was really good to come out of Thesis which was so serious and so academic and so long, to go into something that felt like it didn’t have a lot of pressure; it was just like,” we believe in you enough to go create somewhere”.  It was undirected and it felt very freeing.  I think it was good to have one extreme situation and then another extreme situation, because I think my practice is going to be somewhere in the middle.  I usually approach things very academically, but you need a lot more time to do that and you can’t really work that way in 3 weeks.  It was really good to have so much freedom after being so constrained in Thesis.

AC:  Just to emphasize the importance that going to another place and taking yourself outside of your norm is really good for your work.