Upcoming events and exhibitions at XPACE! 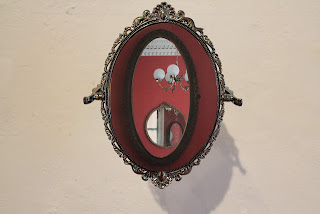 Based around a residency in Syracuse, NY at SPARK Contemporary, Adrienne Crossman and Ursula Handleigh created work responding to their surroundings. Neither Here Nor There explores themes of isolation, disorientation, interpretation and nostalgia. Deterioration created by countless abandoned homes and businesses; the landscape of the present, contrasts sharply with signs of the city’s former prosperity. As observers in a foreign yet uncannily familiar landscape, seemingly insignificant details – meticulously hand painted wood grain, an anomalous conch shell, boarded up windows – became emblematic of how the artists related to their surroundings.

In the spirit of absurdity, Bigger Leak Than Expected explores the half-thought, makeshift solutions of the lazy or preoccupied. A leak from the ceiling is caught by a metal bucket, which has become full. A tube attaches the bucket to another, channelling the over-flow from the first bucket to a second and again, to a third. Walinga’s work comically highlights the amount of time taken to create this three-bucket structure instead of simply emptying the first bucket. By constructing the leak, Walinga adds a performative element: the paradox of creating, and indirectly maintaining the problem that you also seek to solve.

Originally from The Simpsons episode “Mom and Pop Art,” Dziuma’s pieces replicate the accidental sculptures created by cartoon character Homer Simpson. After Homer’s Odyssey is a series of planned recreations that maintain the humour inherent in Homer’s work. Dziuma emphasizes the reference while extending the context of the originals; transforming them from failed to successful attempts at art. Through their failure, Homer’s work parodies contemporary art and criticism, which Dziuma questions as an inherent aspect in contemporary art making.