XPACE has moved to 301 Landsdowne Ave! Here are some sneak peeks at the new space: 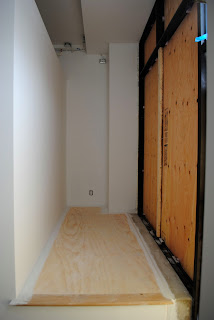 Facing out onto Landsdowne Ave, the window space provides opportunity or collaborative exhibitions that can be viewed around the clock.
Main Space 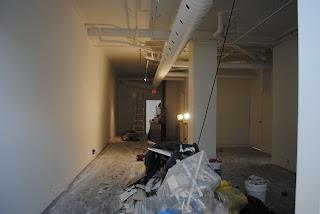 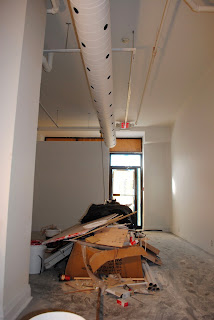 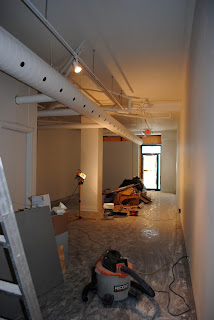 Xpace’s primary space, programmed for group exhibitions, as well as panel discussions, workshops and other events, including space for the Zine Library and Boogie-Woogie Mix Tape Library.
Project Space 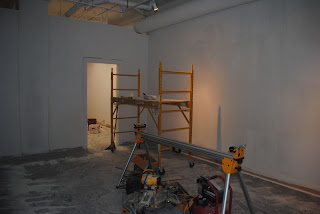 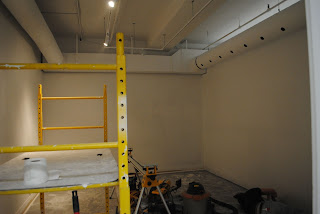 A new incarnation of Xbase, for solo and group exhibitions, including works-in-progress that respond to the environment. 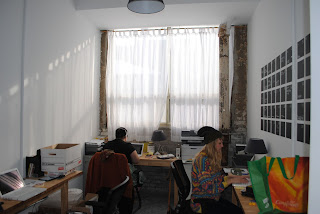 XPACE continues to maintain the Xternal Space in OCAD’s Learning Zone (located in the Jim Meekison Student Lounge), a screen programmed for video and interactive artworks with an emphasis on student and emerging artists. 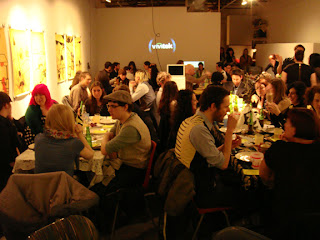 COME FEAST WITH US!

Tickets for FEAST 05 are now sold out!

FEAST is happening Sunday, January 27, 2012 at XPACE Cultural Centre from 6-10 PM.
What it is:
FEAST (Funding Engaging Actions with Sustainable Tactics) Toronto is a series of community dinners and micro-funding events. During each dinner, artists, designers and groups are invited to present proposals for art-
or design-based projects. Everyone attending the dinner votes on which project they would like to fund, and the project with the most votes is given a grant from the money raised from the ticket sales.
The ticket cost for the locally sourced, vegetarian dinner is a sliding scale of $20-30 (and $10 for students with valid student ID).
FEAST works on the basis that the more that people can share, the larger the grants we can collectively provide. Since our frist FEAST, we’ve funded almost $4000 worth of projects.

How it works:
1. Buy a ticket for the dinner on January 27th, 2012 at XPACE Cultural Centre
2. Enjoy dinner and conversation with your friends and community
3. Over the course of dinner people present project proposals for your consideration
4. Everyone votes for which project they would like to fund
5. The project with the most votes is funded from the money raised from ticket sales 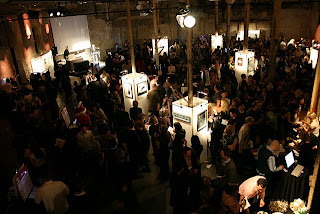 The Timeraiser is part volunteer fair, part silent art auction and part night on the town. Timeraiser artists are paid for their work. Selected pieces will help inspire people to donate their time in support of great causes. The Timeraiser supports emerging and mid-career artists like few other community events do. Artists are paid fair market value for their work instead of being asked to donate their creativity. The art is then auctioned off at the Timeraiser to raise volunteer hours for the community.

The Timeraiser pays fair market value up to $1000 (including framing and HST). You set the price of the work. Timeraiser’s volunteer art jury will then select the pieces that will be purchased for the Timeraiser.

Timeraiser juries typically select:
1. Mixed media canvas/photography/framed work over sculptures
2. Artwork that fits well in a house or apartment
3. Works where it is clear that a financial contribution will make a difference in the artists’ career
4. From their local city; though not always

Applications can be made here.

Seeking video work for a curated project by Suzanne Carte & Su-Ying Lee (Under New Management) taking place in March 2013 at ODD Gallery at the Klondike Institute of Art and Culture (KIAC) in Dawson City, Yukon then traveling to various locations in 2013. The exhibition will take the form of a video rental store that carries artists’ videos. The project employs the characteristics of the retail environment to connect to the local community while, challenging the gallery’s role as an intermediary that delimits the viewer’s direct access to art. “Customers” are asked to pay what they wish, which can be interpreted as cash, a non-monetary exchange, critique, or no renumeration. This facet is in place as an experimental form of engagement, where artists have the opportunity to receive responses directly from viewers. In turn, the viewer has an uncommon channel to the artist. In addition to payment, rental and return are also on an honour-system basis therefore removing barriers that exist due to membership, deposit, and return policies at commercial ventures.

This is the second iteration of the Under New Management video “rental” store. As part of a larger exhibition/project, the first store took place in Toronto from August 3-14, 2010. This method of disseminating video art to the general public was exceptionally popular during its short run.
For information about the project, visit:
http://www.mediafieldsjournal.org/storage/issue1/Hogan/Media-Fields-1-Hogan.pdf
http://www.thestar.com/entertainment/article/839799–queen-west-has-a-surprise-in-store
For submissions forms please visit videorentalshop.blogspot.ca
For further inquiries please contact [email protected]
PLEASURE DOME: NEW TORONTO WORKS
February 22, 2013

Films and videos under 15 minutes in length and produced after January 2011 qualify. For submission guidelines and applications, check out the Pleasure Dome website. Deadline for submissions is Friday, February 22 2013.
EXHIBITION 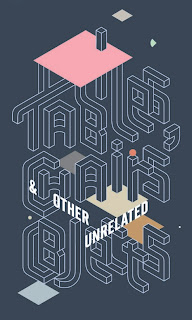 Tables, Chairs and Unrelated Objects
OCADU Student Gallery
January 16, 2013 to February 9, 2013
52 McCaul Street / Toronto
For those of us who make furniture, it is not always the object alone that we pursue. As students within the furniture program at OCAD University, we are encouraged to explore and develop our thinking around the role of furniture — as a medium for personal expression, as a reflection of social and cultural norms, and as an influence upon human behavior. This exhibition presents original furniture pieces that take these broader discussions into consideration.
Featuring work by Jeremy Alter, Nathan Asis, Sean Collins, Sarah Eldershaw, Edward Fong, Alex Taehyuk Ko, Greg McRoberts, Sanaz Mianji, Ewelina Pankowska, Seung-Min Park, Dora Poon, Zeynep Sen, Jade Junghyun Yoo and Aleena Zadi