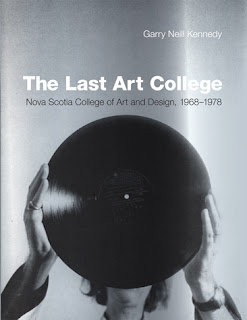 Garry Neill Kennedy’s book, The Last Art College: Nova Scotia College of Art and Design, 1968 – 1978 is a rich, detailed archive of ten of the most interesting and active years in NSCAD’s history.  The synopsis asks, “How did a small art college in Nova Scotia become the epicenter of art education–and to a large extent of the postmimimalist and conceptual art world itself–in the 1960s and 1970s?”  Kennedy’s book responds that it was through a flexible, innovative approach that combined the creative talents of faculty, students, and professional artists.  His compilation of essays, artist interviews, class assignments, project proposals, exhibition posters, images and film stills illustrate this point.  The book is structured around a chronology assembled in 1979 by David MacWilliam, compiled using the Now Bulletin, a notifications page posted daily around campus that included, gallery openings, artist talks, and academic meetings.

Each chapter is devoted to an entire year beginning with 1968-1969 through 1978 concluding with an afterward by Les Levine; an article published in Art in America (July/August 1973) titled, “The Best Art School in North America?”.  Levine asserts that the school’s openness to new ideas and goal of flexibility with regards to educational needs are its greatest strengths and implies that indeed it is the best art school in North America and hopefully it can keep it up.

From the dictionary-like tabs that separate each chapter, to the running timeline of exhibitions, artist talks, and publications throughout; this book is painstakingly and beautifully put together.  Not one detail is overlooked.  Kennedy’s compilation is reminiscent of a scrap book kept over the course of ten years; complete with handwritten letters and snapshots of performances, lectures and exhibition openings.  One of the most interesting things included are copies of instructions for making art.  Submitted to the Projects class by artists like Sol LeWitt, Lucy R. Lippard, and Robert Smithson, these submissions yielded some of the greatest conceptual art.  Instructions from Robert Barry had students “gather together in a group and decide on a single common idea” (p. 14) which would be known only to them and would exist for as long as the idea was kept within the group.  The moment the idea was shared with anyone outside of the group, the piece would cease to exist.  Decades later while studying at the California Institute of the Arts, Mario Garcia Torres created his own work about the student’s response to Barry’s instructions.  What Happens in Halifax Stays in Halifax (in 36 Slides) (2005) involved the reunion of the Project class and consists of 36, 35mm slides with text.  It was created on the occasion of the IX Baltic Triennial (2005) and was exhibited in the Venice Biennial (2007) and the Taipei Biennial (2010).

The Last Art College explores a fine arts school in the radical years of the late sixties and seventies as it successfully pushed the boundaries of art education and fostered creative relationships between students, faculty and professional artists.  This timely book is even more interesting read in light of the recent financial and administrative issues faced by NSCAD.  Named “Halifax’s financially challenged art school” by Allison Saunders in an article published in The Coast, for a deficit of over $2 million.  The pre-existing financial woes of the independent art school which received 60% of its funding through government grants were worsened when the province cut funding for all universities in early 2011.  The school currently has an acting president, Dr. Daniel O’Brien and recently released what they are calling, the Framework for Sustainability, a “plan for the continued vitality and financial sustainability of NSCAD University” (which can be viewed on NSCAD’s website: http://nscad.ca/en/home/abouttheuniversity/news/sustain-040512.aspx).  It seems as though Garry Neill Kennedy is speaking directly to the current challenges faced by the College, when he nostalgically concludes:

“I feel I am fortunate to have been president at the College in more heady days, when security, confidence, and accountability came as rewards for taking risks and for dealing directly with the issues that were of primary concern to committed artists and designers…  We took seriously the admonition not to look back, and we committed with our heads, our hearts, and our hands to engage the new art in truly new ways. [The motto of the college is: “Head, Heart, and Hand.”]  Perhaps time has begun to show that our enthusiasm and our optimism were not sustainable.  But even if this should be the case, I think that everyone associated with the College in its formative period can be proud of our shared commitment not to make any more boring art… and not to make any more boring art colleges!” (p. xxiii)
This book presents a fascinating era in NSCAD’s history and illustrates an idea of what a fine arts school should and could be. 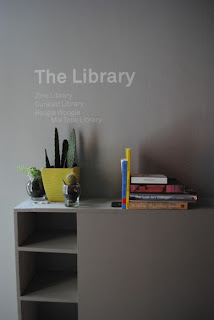 To read more about the collection:
http://www.xpace.info/curatingtexts/anthology/