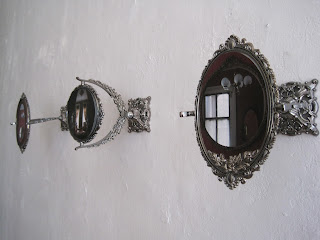 Jessica Cappuccitti:  What was your favourite part of this residency?

Ursula Handleigh:  Experiencing a new city, especially one like Syracuse which was nothing like what I had expected.  I wasn’t expecting it to be so abandoned and so big… so different from Toronto.
JC:  What was your favourite thing about Syracuse?
UH:  I biked around a lot so everything was really different.  My favourite place was this really old camera store in the middle of this suburban setting.  It had all of these really old things that no one ever bought… except for me!

JC:  Was it an antique camera shop?

UH:  No.  It was THE camera place.  I think it wasn’t very popular so there was stuff that had been sitting on the self for like thirty years.  The antique feel wasn’t intentional at all which was what made it so cool.  The signage was old, everything about it was old.  But it also sold digital cameras and stuff.  It was this weird mix of old and new.
JC:  Tell me about the work you created – from inspiration to final product.

UH:  I was really inspired by the house.  It was the first home that was restored in the area and was surrounded by dilapidated buildings and houses that had been turned into government housing.  It was a really interesting mix.  I was also inspired by the fact that film was dying there.  I had known that film was dying but it was kind of almost dead there.  The closest place to develop film was Rochester.

JC:  Not even at the mall?
UH:  No.  There was this drug store down the street that had a sign that said “1-hour” photo and then when you went there it turned out it wasn’t an hour because they sent it out to be developed.   You also couldn’t get any photographic colour paper anywhere.  The camera store sold some black and white stuff because you could do it yourself.

JC:  Tell me about the work itself. 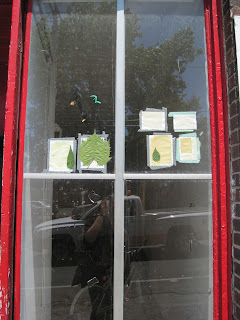 UH:  I experimented with a few things while I was there.  When I first arrived I made anthotypes which are made from plants – you make this plant-based photo emulsion that you coat paper with and then instead of developing it, where the images come through, you put something on top of it and the image fades away in the places that are not covered.  This didn’t turn out very well because I wasn’t there long enough for it to work properly – it took so long for the images to fade.  I left it there for the entire 2 weeks and in the end you could kind of see the leaf that I had put on top, but really it needed a few weeks more.  I also made slides – I rented a slide projector and made fake slides which I got for really cheap from the camera store that sold old things.  This project was inspired by the house we were staying in which was restored to look like it was old but with new materials – so I would take new materials that I could find in the city and make these old slides. 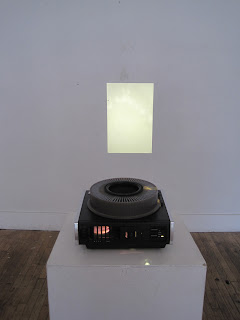 JC:  Did you have any ideas of what you wanted to create coming into this residency?

JC:  What are you currently working on?

UH:  I’m working on this film projector that looks like it’s really old but is made from stuff I found around my house.  Again, it is inspired by the house we stayed at and this attempt to hold on to the past.

JC:  What kind of things did you use?

UH:  This old lamp, like a living room lamp, a work bench from the garage, some hangers, this piping thing for the vent… I think that’s it.  It looks really make-shift, but that’s the point.

JC:  How did you know how to make a projector?

UH:  I didn’t – I just made it up!  I figured if I had a lens and a light, it would project.  So I did that and then I figured out how to move the film – I got a motor and just glued a whole bunch of stuff together so it actually moves the film!

JC:  Do you think that you and Adrienne influenced each other’s work? 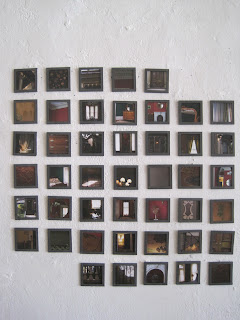 JC:  Is the work you are going to show at XPACE in September going to differ from the work you showed at the end of your residency at SPARK?

UH:  I feel like my work has grown a lot since I’ve come back.  When I was there I would think a lot about things and I was very inspired, but I think it took me some time to be away from there for my work to develop.  So I feel that my work is probably going to be very different from the show in Syracuse, because I’ve been making so much stuff since coming back.

JC:  Do you think that this experience will continue to affect your future work?

UH:  Yea definitely.  The restrictions I felt while I was there, like the limited access to things helped me to become more creative in my use of materials – that is really helping my work to grow.